Waist Circumference (also known as stomach circumference) can be by itself an important parameter for determining the risk of secondary disease due to obesity. 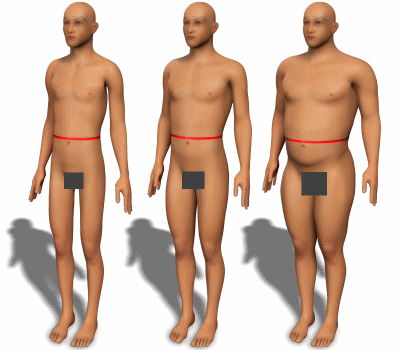 A study published in 1995 studied 904 men and 1014 women Eine 1995 publizierte Studie untersuchte 904 Männer und 1014 Frauen (to verify, 86 men and 202 women). Paramaters like the waist circumference, the Body Mass Index and the waist to hip ratio were measured.

The results are astounding: A waist circumference greater than or equal to 94 cm in men or 80 cm in women is more than 95% associated with a high BMI or an unfavorable waist to hip ratio. That is, the persons concerned have a BMI over 25 or, for those with a BMI under 25, a waist-hip ratio or equal to 0.95 in men and 0.80 in women. Both are signs of an increased risk of complications from being overweight.

As a result, this means that in most cases, the waist circumference alone is just as good a means of risk assessment as body mass index and waist to hip ratio together.

The study can be read here:
Waist circumference as a measure for indicating need for weight management.

As part of the EPIC study, in which nearly 360,000 people were examined, an increased risk of death was found when the abdominal circumference was particularly increased. Optimal for this study was between 75 and 80 cm in women and between 90 and 95 cm in men. Each increase of 5 cm increases the risk of death by 13% in women and 17% in men. It is believed that belly fat is not just pure energy storage. For this reason, a potbelly is much more problematic than fat under the skin or on the hips. The complete message of this study can be read at Ärzteblatt.